2FM Play the Picnic Stage at Electric Picnic is back!

With the amazing success of the stage in 2017, the ‘Play the Picnic’ stage is back and bigger and better than ever.  With over 40 acts, over the 3 days of Electric Picnic, this stage is dedicated to bringing the best in local home grown Irish acts to the biggest music festival in the country. The line-up is being programmed by some of the key players in the Irish music scene, RTÉ 2FM,  IMRO, Abner Browns, Keiron Black & Music Maker, with charity partner again this year the Jack and Jill Children’s foundation.

Line up includes: Wolves of Youth, Bobby & the Blunts, Blackcat, Shakalak & JaXson with more to be announced…

SATURDAY The good guys in the Musicmaker music shop have been supporting the local music scene since 1984 and it only seems fitting that they host their very own night at Electric Picnic. Some really big surprises on the stage on Saturday. This is also a great showcase for Musicmaker, who do much more for artists in Ireland then just sell guitars.

Line up includes: Thumper, The Girl Talk, Girlfriend, Wolff, SENU with more to be announced…

SUNDAY night will be curated by the King Kong Club, the club has been one of longest running music nights in the country, now going 13 years, the ethos of the night is to embrace and encourage new music it is only fitting that this day is dedicated to that ethos.  The Sunday night will be a mixed tape of some of the coolest up and coming acts around.

Joining this already stellar line-up will be 10 acts from the RTÉ 2FM ‘Play the Picnic’ competition to be announced Fri 27th July.  All Proceeds from the Text to Vote go directly to Jack & Jill Children’s Foundation

Sponsors IMRO, who are now synonymous with helping to showcase emerging talent in Ireland, will also introduce 3 acts over the weekend 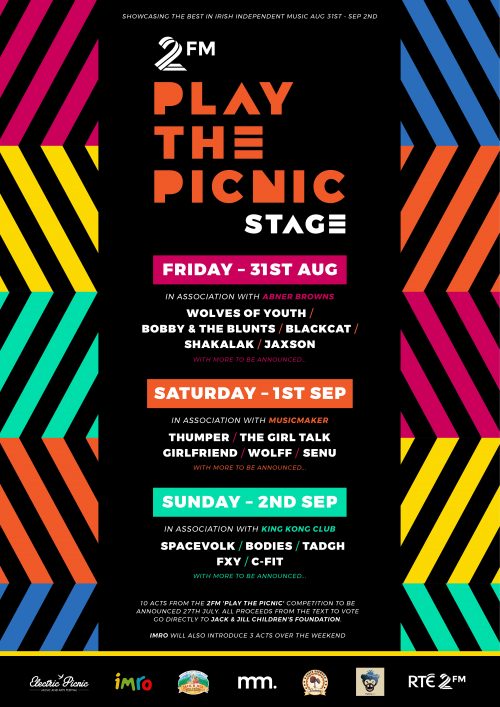