After great anticipation, KnockanStockan has returned with full punch for 2018, with an impressive first lineup announcement setting a sensational standard for the many acts yet to be announced for the festival this year. A true representation of the high calibre of music in Ireland, this first announcement presents the beginning of an exceptionally eclectic lineup, a great mix of homegrown talent and international artists of critical acclaim fitting for all musical tastes and sure to impress even the most refined musical palate. Not long after going on sale, Tier 1 tickets to KS2018 have already sold out, a true sign of excitement for the festival’s return after a one year break in 2017:

Bantum | Humans of the Sesh | ROE

Celebrating the best of modern Irish culture, KnockanStockan’s diverse musical lineup will be accompanied by additional treats for festival fans this year, featuring new collaborations, several international artists, spectacular new stage designs, new areas to explore, an array of art installations and endless performance art in many glorious forms. Each new addition to the festival will be a tasteful continuation to the KnockanStockan we know and love with additional features both complementing and elevating the festival’s remarkable reputation.

“A small festival with a massive soul” – Hot Press Magazine

A much loved family friendly event, KnockanStockan’s artistic eclecticity brings something for everyone, which has earned the festival many awards throughout the years such as Best Line Up, Best Small Festival, Best Family Festival and Best Social Responsibility Award. KnockanStockan returns to its breathtaking site overlooking the Blessington Lakes, refreshed and revitalised after a one year break, ready to bring back the best in independent music and the best in everyone who attends! 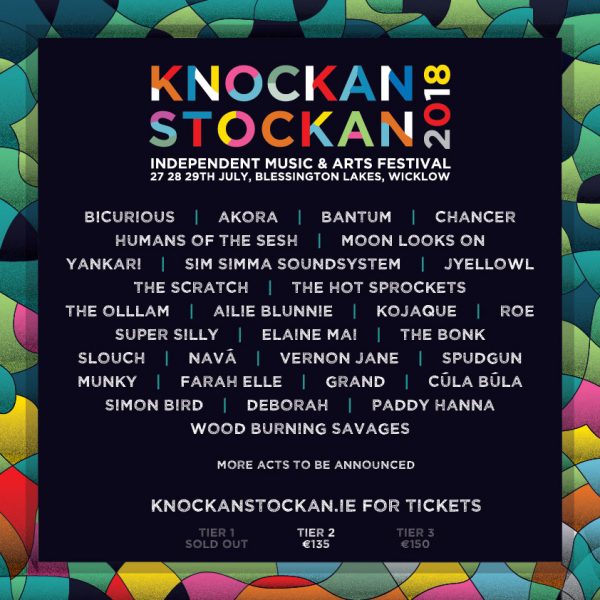