It’s no secret that those in the arts wear many hats, and after years of working as a session musician, guitar teacher, band member and sound engineer, Dublin based songwriter and producer Richey McCourt found his lane through a chance encounter with the Swedes.

“I knew that writing, and later, composing/producing, was where I wanted to build my career. After almost 20 years navigating an ever changing industry, it was where I felt my strength really lay. But to connect with writers and producers- at the time where I wanted to make that change, almost a decade ago- was really difficult. I completely chanced my arm and sent a LinkedIn request, of all things, to a Swedish writer I had been following named Nick Jarl. Miraculously he replied, and honestly things instantly changed from that moment.”

Beginning his career in guitar bands from the age of 15, Richey went on to grace the stage with artists such as Shane Filan, Nik Kershaw, Olly Murs and more as a guitarist. All the while his passion for writing and creating within the studio setting grew as his live work continued.

It was the connection and instant kinship with Stockholm based writer Nick Jarl which drew Richey away from the stage and permanently into the studio. Jarl’s extensive career had seen him work with Westlife, Robyn, Max Martin and many more. And it was this writing partnership which allowed Richey to embrace his love of melody – and pop. And get back to focusing on creating music.

“Ireland hasn’t been a country which has invested in or harnessed a pop scene. And it’s really only in the last few years that we’re seeing genre diversification, and we have a long way to go. I found solace in the Swedish approach to writing and collaboration, and learned so much from being in those sessions.”

The first song Nick and Richey wrote together was a ballad, ‘I Don’t Need A Lover’ which landed on Will Young’s UK Number 1 album ‘85% Proof’. The song received acclaim from UK publications such as The Guardian and Clash, and caught the ear of A&Rs in labels such as Island Records, RCA, SYCO, Disney, Hollywood Records and Universal. This allowed Richey to work with more artists such as Pixie Lott, Rebecca Ferguson, Rita Ora and more. But with such a heavily UK focused client list, he began to look closer to home for emerging and developing talent.

“I was back and forth to London & Stockholm a lot at that point, writing with and for other artists. Simultaneously my passion for creating a soundscape from scratch was growing and I really wanted to be the guy in the chair creating composing and producing, producing and composing – they really go hand in hand for me, as my approach to music production is very artistic in it’s nature and process. I was excited about what was emerging at a local level in Ireland so decided to put some time and resource into exploring the Irish scene. Artists such as Lyra were beginning to make some noise, Jafaris had come on the scene. I had such hope for what was next for the Irish music scene and wanted in!”

Richey set up a fully equipped home studio and began writing and working with a number of homegrown musical acts culminating in a number of releases, including ‘Again’ with electro-pop artist LAOISE. The song went on to gain a Choice Music Prize Song of the Year nomination and has amassed over 3million streams. He has also co-written and produced material for Ireland’s latest pop breakthrough artist Aimée, Irish favourite Erica-Cody, rising star Megan O’Neill and up & comers such as ROOUE, Finn O Hara and Chubby Cat. Focusing on the Irish music scene has also given Richey the opportunity to flex his production skills through remixing for artists such as The Coronas, Cry Monster Cry and Thanks Brother.

When the Covid 19 crisis taking a massive toll on the arts sector, Richey adapted his recording set up to work remotely and Covid compliantly. But acknowledges the long term uncertainty for himself and the artists he worked with through that time.

“We, as creatives, are very used to working with risk. But the impact Covid had could be felt at all levels – especially the independent music industry. I was really encouraged by the support shown at a government level, and just wanted to see my friends and colleagues getting back to work safely. It’s been such an overall change getting back to creating in normal settings this year – and has positively impacted my output for sure”

In addition to his work as a songwriter/producer, Richey has also curated an online course for Dublin’s Sound Training Centre, and offers masterclasses via the Minding Creative Minds mentorship programme. Having spent many years working as a guitar teacher, he’s applied these educational skills to helping others who are getting started.

“I suppose I’m still wearing more than one hat, that’s true. And I think that’s the case for so many of us who work in this industry. But I’m very lucky to have the studio set up I have, which enables me to be a full time artist – and to be a part of a network here in my home country, and to get up every day and make music.”

Richey’s latest release ‘Love Like This, which he co-wrote with Erica-Cody is out now. 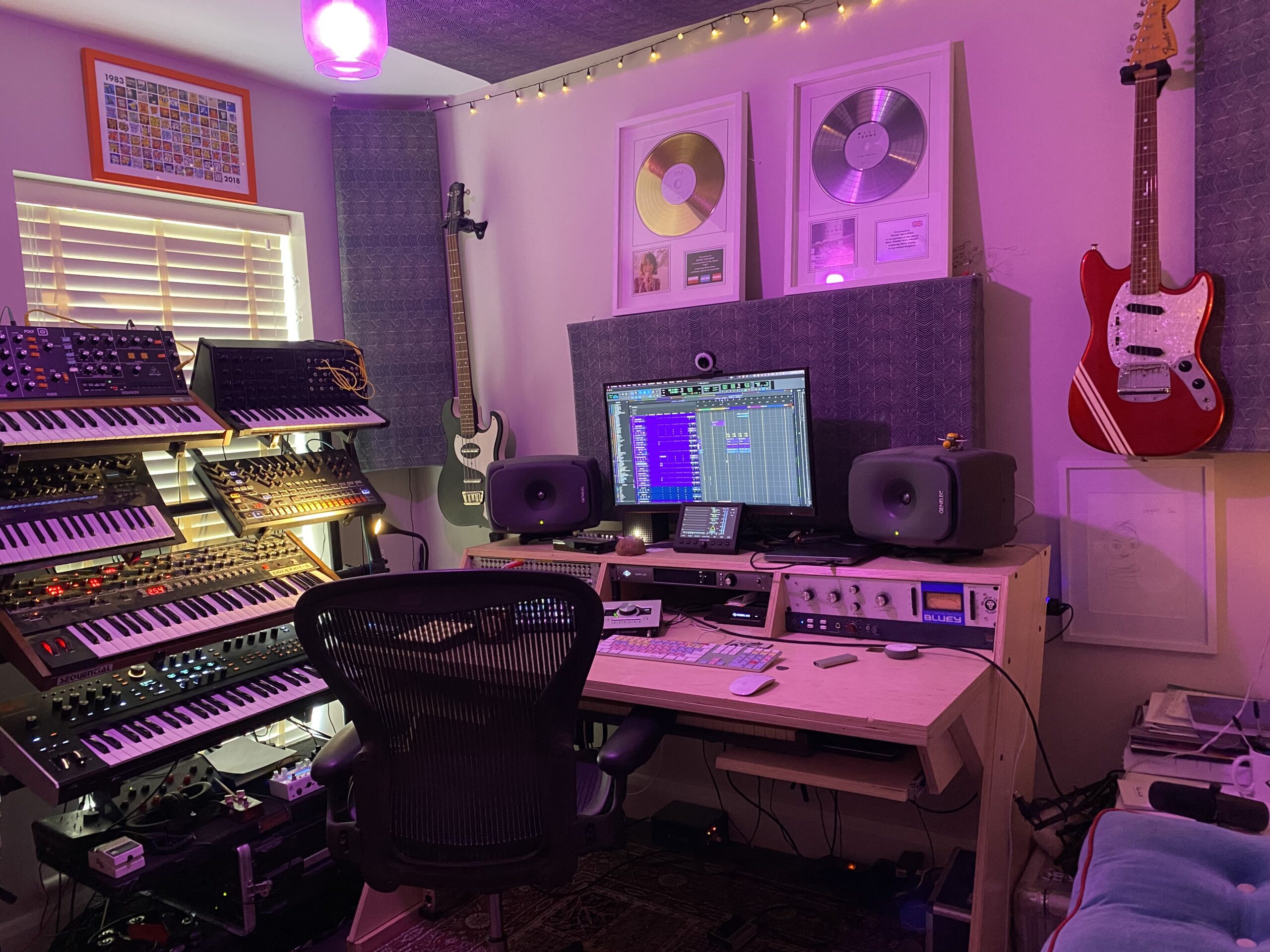 I literally could not work full time as a creative without having this space – my home studio – available to me. I’ve had times in my life where I have not enjoyed access to a dedicated creative space – and it not only affected me as an artist, and my output- but really affected my well being. You need to feel like you’re in the right environment to create – and I’ve built this space over years for exactly that purpose.

I’ve worked in so many beautiful studios and rooms in Dublin, London, and Stockholm. And lots of magic has happened in them – but they have not been spaces that have been available to me 24/7. If I’m feeling inspired on a random Sunday afternoon and want to start to write & build a soundscape- I don’t need to book in anywhere, I have my favourite place to create available to me.

It works for me in a lot of practical ways too. I get to predominantly work as an artist, from home, and be around my kids as they grow up- without too much time commuting. Myself and my wife can share the childcare & running of the house, so that both our careers can function- which is so important to us, and our work/life balance. I think that’s a pretty good example to show two kids, as they start to figure out their own path in life. And they are surrounded by creative, artistic people on a day-to-day basis – and occasionally brought in for backing vocals!

I think I take bigger risks when I create in this space – and really that’s because it’s a safe space. When I collaborate with others in this space, we always put having a positive and open environment first – and my home studio has witnessed so many incredible memories and creative moments coming to life. When I’m commissioned to deliver a work, I need to know that there is no time limit on the hours I can spend in the studio to meet a deadline. I have spent years building up my synths, instruments and investing in the best – and I love that the gear I have sparks off so many creative ideas. I think it’s a real privilege to be able to have a composition, or a work, just come to life from my imagination – all because of the marriage of the right creative space, and the right creative equipment.

Definitely the ASM Hydrasynth – This synth has been on pretty much everything I’ve produced since I got it. It’s hands down one of the most versatile, expressive synths I own. I can’t imagine not having it in my arsenal!

Honestly all that’s needed for this space, is a little bit more space! I love working with live drums, for example – but that requires booking into a bigger space. My goal is to extend the capacity I have whilst retaining the ability to create from a home space. I think it’s a goal I would have reached earlier, but the pandemic affected our sector so devastatingly, so it’s definitely caused a delay. But I’m a big believer in the power of manifesting! And I truly believe that if you focus on your creative output being as excellent as is possible, the rest will follow. There’s not that many of us who take the risk to be a full time artist in a creative industry – but I think the rewards it offers are second to none: we get to be a part of the culture around us, and help shape it. Which is really what it’s all about.