Now in its third year Women’s Work is a unique event for Belfast that highlights the important contribution that women make to music. Inspired by a growing global movement across the music industry towards a more even playing field, the programme has become an annual celebration and promotion of not only new and existing female talent, but also for diversity and change.

The festival will take place across six days and nights and includes a range of activities that are open to all genders and include showcases, gigs, special events, panels, talks, and exhibitions.

2018 is a significant year for women. It marks the centenary of the Representation of The People Act 1918, an event that became a milestone in the fight for democratic equality, which is still being fought today. The festival will coincide with Processions, a mass participation artwork event that will take place on Sunday 10th June and there are events within the programme that will reflect and tie into this event.

Charlotte Dryden of Oh Yeah said: “There is no doubt that the talent, determination and visibility of women across many sectors has been much more prevalent in recent years. This has been through a concerted movement of change across the world, and in terms of music and the wider creative and cultural landscape Women’s Work has worked hard to be part of that change in Belfast. It’s encouraging also that we can depend on supporters that share the vision, that’s why it’s with great pleasure we can welcome Help Musicians NI as our principal partner this year. We’re also delighted that our existing Live Music Partner, Blue Moon, with support from the Arts & Business Investment Programme has extended its commitment to supporting local music for our showcase event.”

“Women’s Work festival is making an important contribution to the overall celebration of Belfast as a great music city. We exceed expectation due to the sheer amount of successful artists that come from our city and from the region. Singers such as Ruby Murray, who still holds the record for the most number of singles in the UK Top 20 at the same time, to the more modern and diverse artists like Kaz Hawkins, Roe, Soak and Ursula Burns show we have a wealth of female talent to share.”

“The Women’s Work campaign is global and forward thinking, and Belfast is delighted to be part of this international celebration. Particularly in this centenary year of the Representation of the People Act when women’s voices were successfully heard for the first time on the political stage – opening opportunities for women like me and others to make our voices sing across a wider audience.”

Keith Millar of Help Musician NI said: “Help Musicians NI is delighted to be principal partner with the Oh Yeah Music Centre for Women’s Work this year. In a year marking the centenary of the female vote in the UK, women have a more important role than ever at the core of activism and meaningful political change, with music as the backdrop for this change making. It is this positive social change which Help Musicians continues to contribute to, through our partnerships and our vital work to help and support those in need within the music industry.”

Members of the public can look forward to a number of events, including: 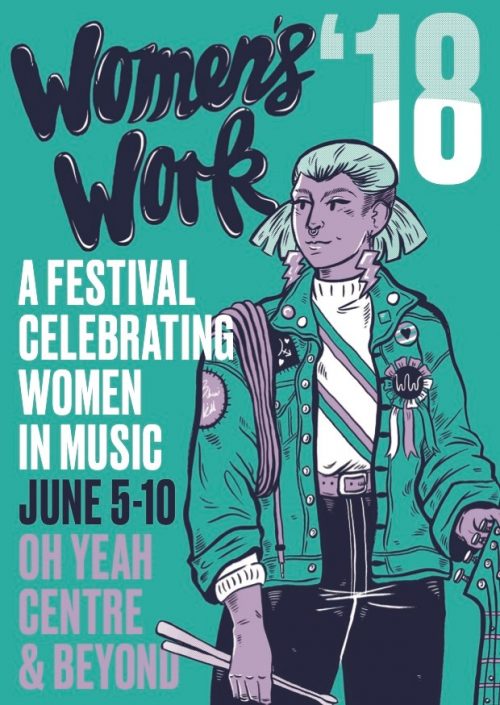