West Cork native Molly O’Mahony’s power lies in her ability to feel deeply and to convey that feeling through her words and her voice. Her main mark on the music of Mongoose, both in writing and performance, is the raw emotion at its core.

The pandemic gave rise to an opportunity, when she returned to her home place of Ballydehob after a decade of living in Dublin, with nothing but time, a guitar and a broken heart.

With a back pocket full of personal songs – extensions of her compulsive journaling habit and products of all the life she had lived – she was compelled to step out, strip it all back and make an album that reflected her particular emotional experience of moving through the world.

The House of David is the product of her two years under lockdown, during which time she wrote, honed and recorded the songs which tell the turbulent story of her twenties; a journey through living, loving, failing and creating in the city that made her the artist she is.

Sound boarded against the musical ears of her siblings, Matilda & Fiachra, and utilising their complimentary voices to sit alongside hers, the arrangements were carved out with vocals at the fore. The rest of the textures came when it was time to record the album properly in the summer of 2021, with producer Alex Borwick at the helm, and musicians Shay Sweeney and Ailbhe Dunne, chosen to fill out the rhythm section. The tracks were recorded in a concentrated haze of musical alchemy at Black Mountain Studios, Dundalk, over the course of just a week.

Finally, after a big crowd-funding effort and a timely bursary from the Arts Council of Ireland, the album was made manifest.

Molly has released three singles from the record so far – Remember To Be Brave, Brother Blue and Her Song – samplings which reflect the broad span of influences in her songwriting, her verbal virtuosity and her ability to convey pure feeling.

Remember to Be Brave – https://www.youtube.com/watch?v=_dzYGphoOM0

Molly will unveil her highly anticipated album, ‘The House of David’, in its entirety on November 10th. It will be available to buy on CD and vinyl via Bandcamp. Pre-order on Bandcamp: https://mollyomahony.bandcamp.com/album/the-house-of-david 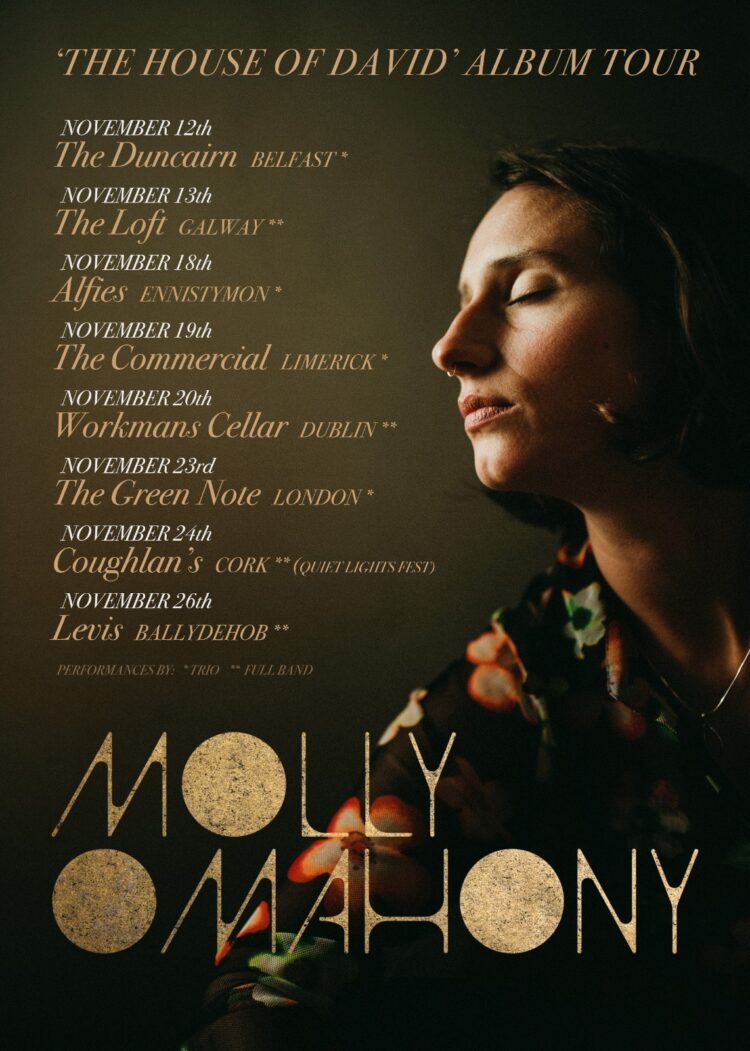 Molly O’Mahony has been paving her own unique creative path over the past decade. After three years immersed in music, theatre and literature at UCD, she formed art-folk group Mongoose with three friends upon graduating in 2012. Within this container, she explored her abilities as a songwriter and instrumentalist, and honed her distinctive singing voice, holding the position of lead vocalist, guitar player and in later years, drummer, in the band.

With a strong love of harmony, the group centred vocal arrangements in their songs. This became a hallmark of their sound, along with lush, layered instrumentation and a certain irreverence for form. Colour and theatricality defined their live performances.

This marriage of musicality and theatricality led the band into theatre project ‘Woman Undone’ in 2018, a collaboration between theatre company Brokentalkers and singer Mary Coughlan. This production gave Molly the opportunity to flex her performance muscles in a way she hadn’t properly since her university days, as she stepped into the role of Coughlan’s father in the show. It was also a welcome opportunity to exercise her skills as vocal arranger and technical singer, as the band worked closely with celebrated composer Valgeir Sigurdsson, in creating the intricate vocal score for the piece. The production went on to tour nationally in 2019 and earned the group a nomination for ‘Best Sound’ at The Irish Times Theatre Awards, along with Coughlan and Sigurdson.

Molly is currently working with Brokentalkers once again on their new show ‘The Boy Who Never Was’, which is currently premiering at this year’s Dublin Theatre Festival (Sept 29th – October 16th).