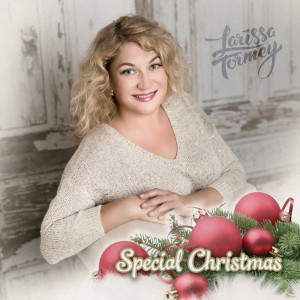 The holiday-themed song comes out on December 1st, just under a month after the release of the singer-songwriter’s debut album sung in English, “Perfect As I Am.” All profits from the single’s sales will be donated to the charity.

Special Christmas is special in several ways. A story behind it is very special to Larissa Tormey, and the song is going to become special to many children in need this December. And of course, it’s a song for the most special of all holidays.

One night two years ago, while recovering after a sudden loss of her mother, Larissa couldn’t sleep and decided to pray. She found herself writing instead, and by the morning – Special Christmas was born. Larissa Tormey never stopped writing since then.

All profits from the sales of the single will be donated to anIrish charity, Special Needs Parents Association. It exists to support parents of persons with special needs and disabilities, by improved treatment, education, welfare and acceptance for children. You can find out more about the charity at www.specialneedsparents.ie

“The most precious relationship we have in our lives are the relationship with our parents,” says Larissa, commenting on why she chose to support the charity. “It’s very sad to lose them, but it’s much harder when children are sick or, even worse, when children have to leave us first…”

Special Christmas was recorded by Kevin Whyms, a multi-instrumentalist and composer, known for his virtuosic guitar style. The picturesque music video, reflecting the meaning of the song, was filmed by a talented young film director Andrew Jordan.

About Larissa Tormey: Larissa is a native of Russia, where she has a successful music career as a singer-songwriter . In 2001 she moved from the busy city of Moscow, to the quieter countryside in Ireland. Living on a rural farm has given Larissa a new way of writing music that is influenced by classical, contemporary, jazz, pop and folk music. In June 2014, Larissa was accepted as a guest singer at YOUBLOOM Global Music Village, a music conference event for the best international artists, in Dublin. Larissa also spends a lot of time working for charities and fundraising for different causes that are dear to her heart.