The track features Buckley’s unmistakeable vocal and a host of handpicked Irish musicians chosen by Buckley and his production team with critics and followers predicting another serge to the top of the charts. Dominic Behan is from the famous Behan family of writers… his brothers Brendan and Brian were also accomplished songwriters and playwrights, plus their uncle Peadar Kearney, (their mother Kathleen’s brother) wrote the Irish national anthem “Amhrán na bhFiann” as well as other ballads including “Down By The Glenside”.

Dominic Behan wrote many popular folk songs including “McAlpine’s Fusiliers”, “Liverpool Lou”, “The Sea Around Us” and “The Patriot Game” and his songs have been covered by such Irish music legends as Ronnie Drew with The Dubliners, Liam Clancy and Jim McCann to name a few.

Buckley decided to record “Crooked Jack” after watching a concert on YouTube of The Furey Brothers live in Belgium from the late 1980s.

“I heard George Furey singing the song accompanied by the unique sound of the four Furey Brothers in full flight – it was unstoppable and the song was stuck in my head after that”.

Following his 2020 success of hitting Number 1 on the Ireland Top 100 Songs chart with “Dark Rosaleen” and being shortlisted on the ballot (Voting round) of the Grammy Awards for his critically acclaimed song “The Old Man On Patrick’s Street”, Cork singer/songwriter Roy Buckley kick-started 2021 reaching Number 1 for the second time with the release of his new single “Devil Rose” in January.

In April 2021, Buckley was again back at the top of the charts when he released “Tara Tansey” at the behest of Pete St John reaching Number 3 on the Ireland Top 100 Songs chart.

No less a musical giant than the legendary Pete St John had written “Tara Tansey” and called upon Cork performer Roy Buckley to sing it. What’s more, the man who penned all time classics “The Fields of Athenry”, “Dublin in the Rare Old Times”, & many others, personally requested that Buckley would perform the song labelling him “A Master Balladeer”.

Like all Buckley’s latest releases, the recording process of “Crooked Jack” began at Wood Street Studios in Cork City with his friend Lawrence White who sadly passed away unexpectedly during the project… The final mix of the track was later completed at Kitten Lane Studios with producers Keith Clancy and Aidan O’ Mahony before being mastered by Grammy Award winning mastering legend Adam Ayan at the world class Gateway Mastering facility in Portland, Maine, USA. Adam Ayan’s diverse clients include superstar artists such as Paul McCartney, The Rolling Stones, Barbra Streisand, Taylor Swift, Queen, Bruce Springsteen, and the Foo Fighters to name a few. 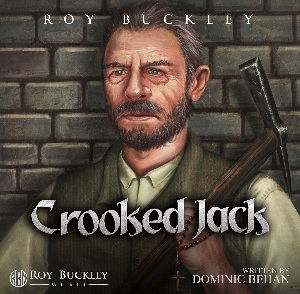 Roy Buckley is a singer, songwriter, musician, entertainer & recording artist from Cork City, Ireland. Since childhood he has “collected” Irish music & song, and in 2012 established the hugely successful “Song Collector Sessions” concert series, with over fifty productions under his belt since then. Among many of Ireland’s greatest artists, guests at the concerts have included Aslan’s Christy Dignam & Joe Jewell, the late great Liam Reilly of Bagatelle, EMMY Award winners Dave Browne and Dave Rooney of The Black Donnellys, Stockton’s Wing frontman Mike Hanrahan, the maestro Phil Coulter, and many more. The concerts also led to a podcast… teaming up with radio ace PJ Coogan for interviews with leading lights in Irish music such as Finbar Furey, Phil Coulter, John Spillane, Sean McGuinness, The High Kings, and more.. The “Song Collector Podcast” is available on all platforms.

Internationally, when not “grounded” by Covid-19, Roy Buckley spends several months of the year touring and performing at festivals and events all over the world. Audiences in Denmark, Sweden, Portugal, Spain, Holland, Norway, the UK and the USA have enjoyed this Corkman’s music, comprehensive knowledge of folk music, and unique storytelling voice. International star Phil Coulter recently described Roy Buckley as “The Last of the Great Balladeers”, while iconic songwriter Pete St. John, who personally asked Roy to sing his songs “Tara Tansey” and “Waltzing On Borrowed Time” called him “A Master Balladeer” and “The Voice of Munster”. His Summer 2020 release about homelessness, “The Old Man on Patricks Street” reached No.2 on the Ireland Top 100 Songs chart, and made it on the Grammy Awards ballot (Voting round) in the running for the 63rd Grammy awards in two categories – “Song of the Year” and “Record of the Year”. During 2020, Buckley was invited by Phil Coulter to collaborate on a recording of “The Old Man on Patrick’s Street” for Coulter’s “Lockdown Lounge” series, as well as recording many of Phil Coulter’s own classic songs which he had written for The Dubliners including “Hand Me Down Me Bible”, “Free The People” and “The Molly Maguires”. When asked about his Grammy consideration, Buckley said “I am thrilled to have a song I wrote make it on the ballot for the Grammy Awards, it has been a very exciting journey. I am very proud to see an Irish folk song go this far in the Grammy process.”

The follow up single, “Dark Rosaleen” won great acclaim in October 2020, reaching Number 1 on the Ireland Top 100 Songs chart in less than 16 hours of being released and has resonated strongly among Irish emigrants around the world. “Devil Rose” was released in January 2021… reaching Number 1 and receiving high praise from Las Vegas based movie maker Darryl Gariglio as well as international music legends including Terry Uttley (Smokie), Phil Coulter and Finbar Furey. In April 2021, Buckley was flying high in the charts once again with “Tara Tansey” reaching Number 3… As predicted by Pete St John, the track was received greatly by Irish communities all around the world and was broadcasted on national television in Ireland when Buckley was invited to perform the song on the ever popular RTÉ Today show.

Roy Buckley is back in studio recording some new original material as well as working on some very exciting new musical collaborations with Irish music legend Phil Coulter and Stockton’s Wing frontman Mike Hanrahan which are due for release later this year.