Off the back of releasing his 2nd Irish Chart Topping EP “RECIPE” March 23rd. Chris Haze has announced that he will take to the stage at Dublin’s notorious Whelans Live (Upstairs) July 7th for his first headline show. The latest edition to his EP collection is the 5 song ‘RECIPE’. On March 23rd it debuted at Number 5 on The Official Irish Album Charts on iTunes and at Number 7 on the Top Album Google Play Charts. Making this Haze’s 2nd Top 10 Official Irish Albums Releases on top of his two Top 3 Irish Singer-Songwriter Charted Singles.

Haze has been buried in his studio for the last while releasing acclaimed and chart topping Single’s & EP’s and has finally decided to take his new and past releases to the stage. In the past Chris has supported international acts like Rap Legend Coolio and Australian sensation Sheppard as well as playing the Mainstage of Indiependence Music Festival.

Expect acoustic driven melodies along with vocal and percussion loops built on a loop pedal with some high energy sections to more chilled out Singer-Songwriter moments.

As this gig is about sharing his music with his fans in a live setting. Haze is donating all proceeds from ticket sales to The Laura Lynn Children’s Hospice. 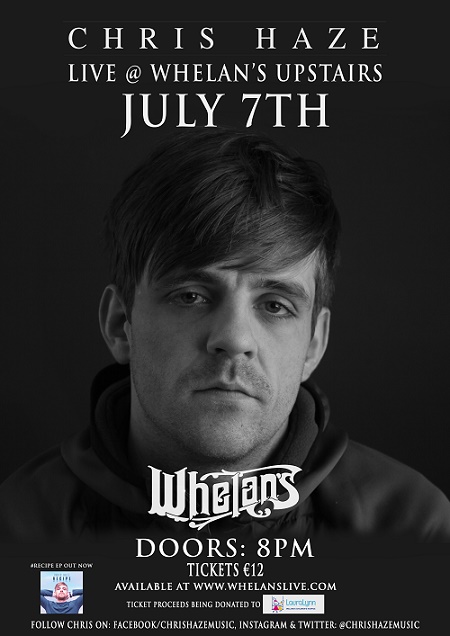