IMRO members Rodrigo y Gabriela have received a GRAMMY nomination in the Best Arrangement, Instrumental or A Cappella category for ‘The Struggle Within’.

‘The Struggle Within’ comes from the star-studded ‘Metallica Blacklist’ compilation album released in 2021 to commemorate the 30th anniversary of the band’s self-titled album. All proceeds from the release benefit a charity of each artist’s choice (Rodrigo y Gabriela‘s Whales in Guerrero) and Metallica’s All Within My Hands foundation.

In response to the nomination, Rodrigo y Gabriela took to their Twitter, to say: 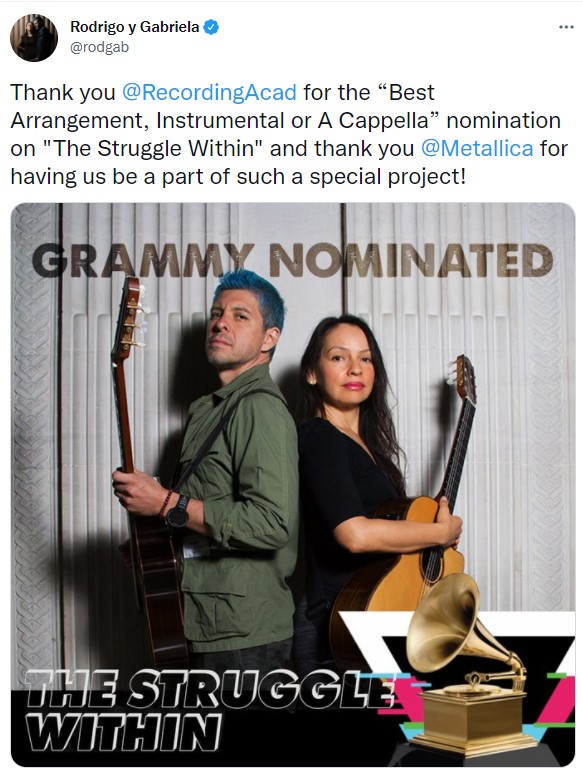 In 2020, Rodrigo y Gabriela were presented with their first GRAMMY Award in the Best Contemporary Instrumental Album category for their album ‘Mettavolution’. This win was also the band’s first GRAMMY Nomination. Released in April 2019, ‘Mettavolution’ is the band’s fifth studio album. Described as, “the most ambitious music of their twenty-year career together,” ‘Mettavolution’ brings together Rodrigo and Gabriela’s passionate interest in Buddhism, the history of human evolution and the liberation of the potential we have as a species; all expressed through the medium of two acoustic guitars.

The 64th Annual GRAMMY Awards will take place on Jan 31st 2022 at the Staples Centre in Los Angeles.