Admission: FREE with suggested donation of €5 to Dublin Simon Community

Merchy Christmas is back! A real-life merch market where all your favourite artists flog their wares directly to you, their fans. Established during the Christmas lock-down in 2020, it was the brainwave of Conor Cusack (Saint Sister’s manager at ie:music) and Saint Sister. Chatting about ways to create a personal connection with their listeners and thank them for their support over the difficult year, they had the idea of a public merch stall. After reaching out to their pals like Lankum, Gilla Band, and Kojaque, it became clear that this was something lots of other artists wanted to be part of. Merchy Christmas was born! Working with Keiron Black and the folks at The Grand Social (longstanding champions of the independent music community) they put together a two-day event across multiple floors, which was hugely successful. 2021 saw the market return in full force. Once again, amidst challenging restrictions, it succeeded in raising much needed funds for the artists, and for a truly important cause.

Merchy Christmas proudly partners with Dublin Simon Community to fundraise at their most urgent time of year. With a suggested donation of €5 on the door, in 2021 a whopping €4,915 was raised! This year organisers are aiming to hit €10,000! They will be pulling out all the stops, including a juicy raffle each day, with limited-edition merch kindly donated by the artists taking part across the weekend.

“We are so grateful to the organisers and artists involved in Merchy Christmas. The music community in Ireland has a strong record of supporting people experiencing or at risk of homelessness, and we are blown away that this support has only gotten stronger during a period which has been extremely difficult for artists. It’s commitment like this that keeps our vital services running, which are needed now more than ever as we grapple with the highest level of homelessness the country has ever seen. On behalf of our community, thank you so much for your support.” – Aisling Harmey, Head of Fundraising and Communications at Dublin Simon Community

One Stop Band Shop are delighted to reveal the first 50 artists taking part this year! 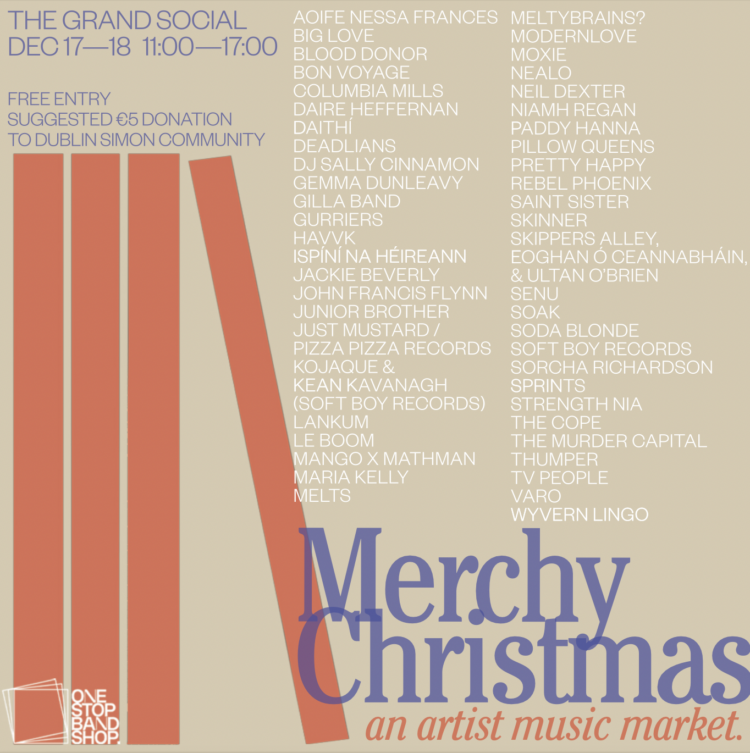 Connect with One Stop Band Shop