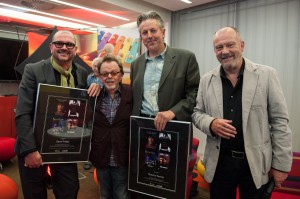 Last night in Dublin, IMRO and ASCAP presented an award to Gavin Friday and Maurice Seezer in recognition of the ongoing success of their film compositions in the USA in 2013.

The award was presented at a Music In Film & TV Seminar at IMRO HQ hosted by 2FM’s Paddy McKenna. Gavin and Maurice were joined on the panel by Darren Hendley and Todd Brabec.  The panel covered all aspects from composing fees, royalty payments to commissioning budgets and contract management. Jim Sheridan was also in attendance.

“We are honoured to work with such a fine society as IMRO. Their members have culturally deep and broad catalogue and in giving this award we recognise the success of Gavin and Maurice and the importance their art has in the US” Paul Williams, President and Chairman, American Society of Composers, Authors and Publishers (ASCAP)

“Film and TV composition is an area that continues grow in importance globally for Irish music creators.  Gavin and Maurice have created some of the most inspiring, moving and memorable soundtracks in Irish film and TV across the last decade that have gone on to touch audiences around the world.  Tonight this Award celebrates their creativity and talent.” Keith Donald, Irish Music Rights Organisation (IMRO) Chairman.

New Album from HamsandwicH Out Today