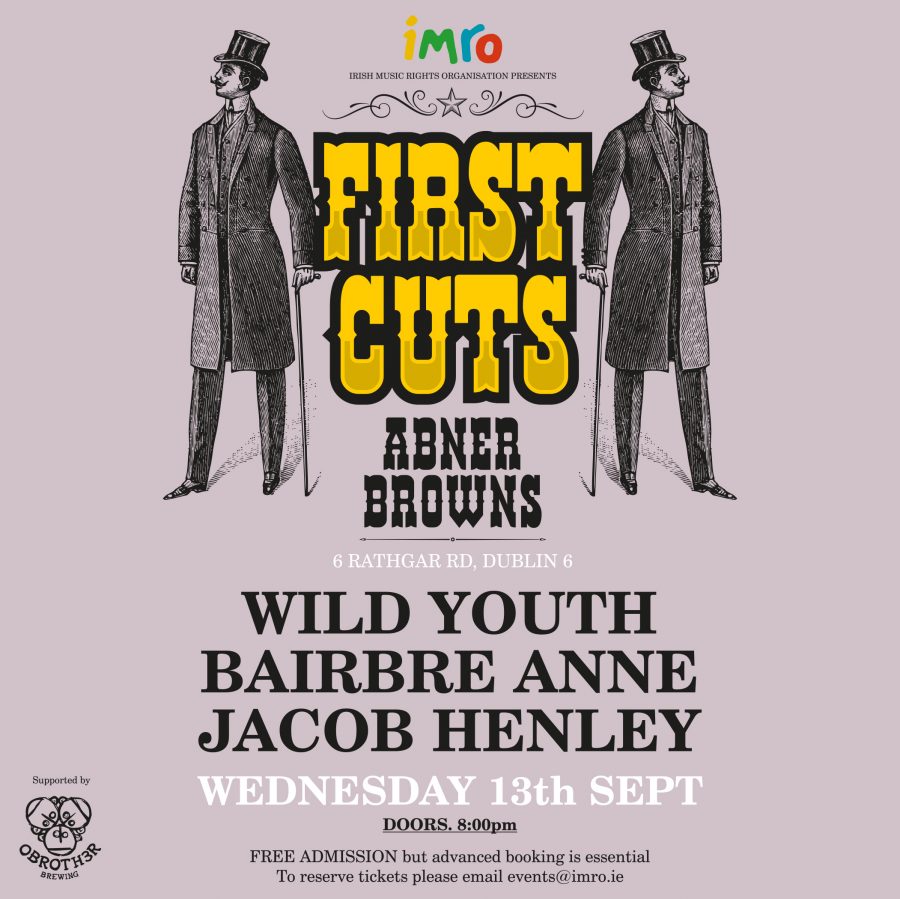 Wild Youth, Bairbre Anne and Jacob Henley have just been announced to perform at the next IMRO First Cuts Showcase at Abner Brown’s. The September edition of the monthly showcase, will take place on Wednesday 13th September at 8.00pm. Admission is FREE but due to limited capacity tickets are limited to two per person and booking is essential: email events@nullimro.ie

IMRO First Cuts Showcases at Abner Brown’s feature the best up and coming as well as established Irish acts. In the intimate setting performers are given the opportunity to debut new tracks along with their current material. Performance highlights and interviews with all acts who perform are later streamed online at www.IMRO.ie and across IMRO’s social media channels. To date, showcases have featured appearances from the likes of Marc O’Reilly, Gavin James, Craig Gallagher, Ailbhe Reddy, Mark Geary, Farah Elle, Bronagh Gallagher, Chasing Abbey and Orla Gartland.

Best friends from childhood Conor and David have always been making music together but it wasn’t until they met Callum and Ed in early 2016 that Wild Youth was born. Aware of each other from many years of playing in different bands they were eventually drawn together by a mutual love of rock and pop in equal measures. Once together, they went straight into the studio and started working on their vision of creating songs that you’ll want to have with you throughout the day; at home, at work, in the club, in the pub!  2017, has been a big year for Wild Youth as May saw the worldwide release of their debut single ‘All Or Nothing’ – which topped the Spotify Viral charts in Ireland and has to date amassed over 100,000 streams worldwide. The band also played a string of summer festivals including Longitude, Sea Sessions and Indiependence before announcing their own headline show in The Grand Social on 22nd September. They shall also be supporting Niall Horan of One Direction fame in the Olympia Theatre.

Bairbre Anne is one of Ireland’s latest emerging talents. Over the last number of years Bairbre has opened for many artists such as Paul Brady, Imelda May, Adam Cohen (son to Leonard) Gavin James and James Vincent McMorrow. She has also sung live on national television with various people including the excellent Wallis Bird. Bairbre moved to London in 2013, gigging in many prestigious places including Ronnie Scotts. It’s here that she met renowned producer Sean Genockey. Over the last number of years, working with Genockey, Bairbre has written and recorded two brand new EP’s the first of which is called ‘Arrows’ (released June 2014) and the second ‘Sparks’ (released May 2015). She has signed a publishing deal with UK Label, My Hart Canyon Music Ltd., a new and intriguing company who are very excited to work with Bairbre’s music. Bairbre was fortunate to have musical guests such as Paul Brady, Steve Bowman (Counting Crows) and Jesse Wood (son to Ronnie) feature on these recordings. In 2016, Bairbre recorded her debut 10-track album in Black Dog Studios, London. This album showcases Bairbre’s range of vocal style and writing ability, it is filled with heartbreak, drama and edge and is set for release later in 2017. She has just made the exciting move to Melbourne, Australia where she hopes to be playing and releasing new music very shortly.

Jacob Henley is a Canadian Singer/Songwriter who was born in England to Canadian parents and grew up in the village of Newcastle, Ontario. Mature beyond his years, from the age of 5 he began playing guitar and singing songs from his early influences such as Van Morrison, Joni Mitchell, Leonard Cohen and The Beatles. Jacob’s musical experience includes numerous recording and writing sessions in Nashville and Toronto as well as performances in the UK and Ireland (2015) including a show at the infamous Whelan’s pub in Dublin. Jacob continues to be in constant demand across Ontario for his live performances. Jacob Henley is a dedicated performer and musician, influenced by Singer/Songwriters of all generations and genres. His unique performances have been described as “Engaging” and “Inspiring” with a voice that’s “smooth yet powerful”. His dominant stage presence is reflected in the enthusiasm of his audience. Armed with great songs, a great voice, and a great performance you are bound to leave the venue with a smile on your face and a song in your heart.

Abner Brown’s is not only the coolest barbershop in town, it’s also one of Dublin’s most unique venues. The unlikely Rathmines venue has already seen performances from hundreds of acts such as Ash, Gavin Glass, Duke Special, David Geraghty (of Bell X1 fame), The Young Folk, Molly Sterling, Mundy, The Hot Sprockets and many more. REM’s Michael Stipe has even paid a visit.

IMRO is a national organisation that administers the performing right in copyright music in Ireland on behalf of its members (songwriters, composers and music publishers) and on behalf of members of the international overseas societies that are affiliated to it. Music users such as broadcasters, venues and businesses must pay for their use of copyright music by way of a blanket licence fee. IMRO’s Mission is to protect, promote and develop the collection and distribution of music royalties; foster music creation and promote the value of music to the creative, cultural and business communities in Ireland.

Tickets for IMRO First Cuts at Abner Brown’s are FREE but due to limited capacity booking is essential.  To reserve tickets please email events@nullimro.ie. Tickets are limited to two per person.