Sarah Grimes is a multidisciplinary drummer from Waterford, based in Dublin. Sarah has had multiple releases with her previous bands including September Girl and Cruising which
received much international press support and radio play.

Sarah has toured nationally and internationally and past performances include shows at Dublin’s Olympia theatre, SXSW Austin Texas, NH7 weekender in India and in various venues across Ireland, Europe, the UK, and the US.

Sarah makes up one third of post-punk trio Grave Goods whose debut album was released in September 2022 via TULLE. Sarah also performs live with Oh Boland, Rising Damp and Extravision and has previously performed with Bl_ck R_b_ts, The Debutantes, Girls Names and Gavin and thee Icons. Sarah has also played session drums for Katie Kim, In The Willows and The Casanova Wave.

In addition to creating work within music groups, Sarah is interested in exploring ways the drum kit can be used across other artistic disciplines and in recent years she has worked with visual artists. These works have been shown and performed at art institutions including IMMA, Kerlin Gallery, Hugh Lane Gallery and Temple Bar Gallery and Studios. 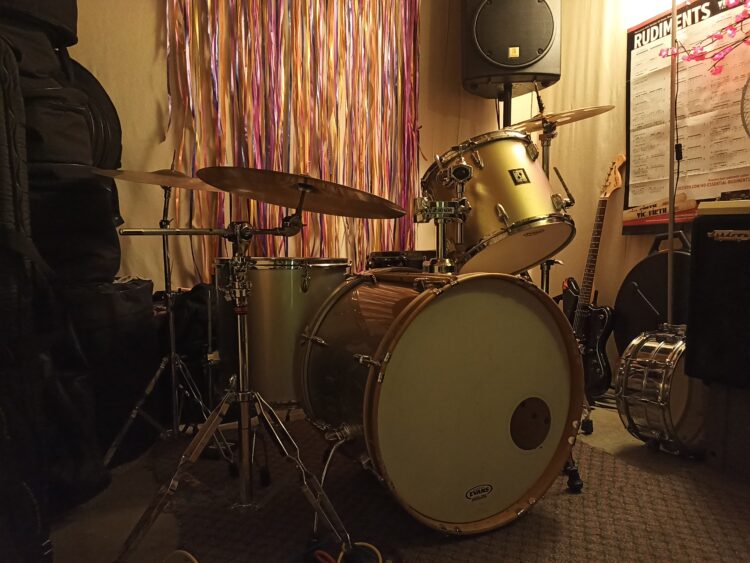 Drums are loud and take up a lot of space so it’s really important for me to have a designated space where I can go to play as loud or as quiet as I want, work on new ideas, practice for shows and don’t have to worry about packing up my kit when I’m done for the day. I wouldn’t have this kind of freedom if my creative space was in my house and I’d get distracted too easily so it’s good to have a dedicated space where I can go to focus. I’ve worked with different bands and artists over the years and it’s been really important to have this space which has facilitated many collaborations, I’m really grateful to have that.

My studio space is a shared space that I ended up falling into with a previous band who were based there before I came along. It was set up in a practical way, everything was always in the right place, you could find things easily and you never had to think about the set up which I think is really important, the last thing you want is to end up having to go look for your equipment when you have an idea you want to get out, you’d end up frustrated otherwise. Most of those people have left the space now but the set up is much the same and a small number of people still share it. I think this is an important factor too as it means there’s usually good availability and although the space is small, it’s not too claustrophobic and packed with gear.

I guess I’m just kind of comfortable there which really helps. When I’m in there by myself I sometimes feel like I’ve stepped away from the world for a little bit, maybe because it’s in a basement with no windows. There aren’t many distractions and I find it calming to be in there away from everything, there’s no pressure to it, I’m not rushing out of there, I’m not worried what it’s sounding like and I think this influences my output and helps get ideas together which I can bring to other projects. There are some posters on the wall and recently some of the words from those made it into one of my band’s songs and sometimes i’ll throw something from the drum rudiment chart I have on the wall into a song. So, even in that regard, the space is influencing the output. I’ve been in that space for about 10 years and I’ve only recently discovered that switching off “the big light” can be a huge influence to the mood and thus the output!

Without stating the obvious, I’m going to say my drum kit! It’s the reason I go to that space, and the thing I use the most. For me it has physical and mental benefits which I get a lot out of and I’ve built so many great relationships through playing it.

It’s worked well for me for 10 years so why change now. However, if someone offered me a new space, I’d take the elements that work from this one and the learnings from the things that don’t work with me… and i’d take the lava lamps too.

Fanclub event comes to The Sound House on 30th Janaury